MADA was established in 2006 and continues to be at the forefront of Mariachi music for San Antonio. They have taken 1st place at the Houston Stock Show and Rodeo professional Mariachi competition. Not only once but twice, back to back in 2015 and 2016. In doing so, they were given the honor of opening up for La Arrolladora Banda El Limón, La Maquinaria Nortena, Los Huracanes Del Norte, and Los Recoditos for a record breaking 76,000 people. Azteca de América has shared the stage with Mariachi Vargas de Tecalitlan, Mariachi Sol de Mexico and has accompanied Placido Domingo, Aida Cuevas, Paquita La Del Barrio, Steven Sandoval and many others. They offer a professional show that delivers a high energy, traditional Mariachi experience! They have worked and collaborated with MPR (Munoz Public Relations) in teaching and performing for the Mariachi Vargas Extravaganza for the past seven years. Performances include: Long Center (ATX) Lila Cockrell Theater (SATX), and recently there third appearance in the "Serenata para Las Madres" concert at the McCombs Empire Theatre. Two of the three performances were accompanying Steven Sandoval “La Voz Del Mariachi!” ​MADA has also produced their very own, 4th annual “Noche de Romance” concert at the historic Guadalupe Theatre. A must see, sold-out show that supports the students of the Traditional Music Program of the Guadalupe center. They have also produced the first annual “Fiesta Del Mariachi” spectacular during San Antonio’s Fiesta season. This event features an evening of local professional groups. 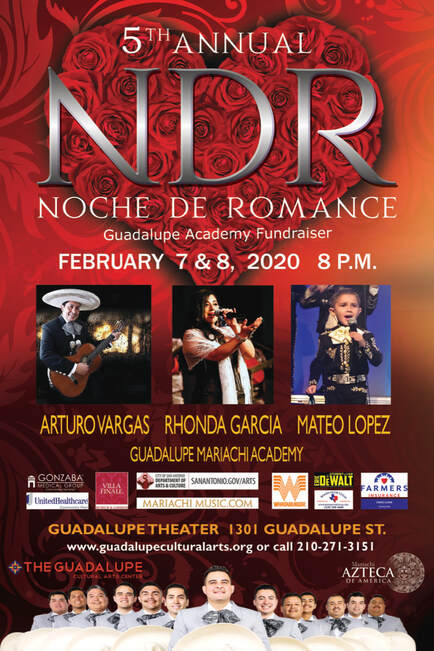